As one of the largest joints in your body, your hips help you walk, stand, and move. When one or both of your hips develop arthritis or are damaged, you may experience severe pain and problems with mobility.

Hip replacement surgery is a common procedure that has helped thousands of people overcome mobility issues and return to normal activities.

In fact, the procedure is so common that more than 450,000 hip replacements are performed each year in the United States. Valencia is a patient of Joseph W. Greene, M.D., board-certified orthopaedic surgeon, at the Louisville Hip & Knee Institute. Dr. Greene specializes in partial and total knee replacements, anterior hip replacements, and revision joint replacements. In Valencia’s case, Dr. Greene replaced not one, but both of her hips. The first time was in 2018 and the second in 2020. Today, Valencia says, “I feel so much better. I can sit and do all kinds of things I couldn’t do before. He did an amazing job.”

Why is hip replacement one of the most successful orthopaedic procedures available today? Can anterior hip replacement–a more advanced and less invasive subset of these procedures–alleviate your pain and restore your ability to move freely?

Valencia, a patient at the Louisville Hip & Knee Institute, shares her hip replacement journey and the benefits she experienced.

What Is Hip Replacement Surgery? 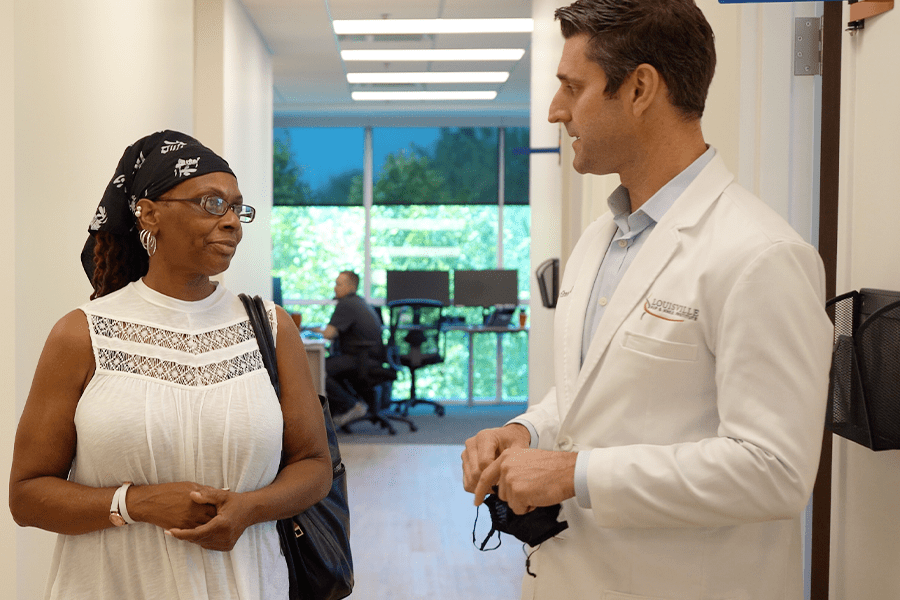 Hip replacement surgery is also known as a total hip replacement or a hip arthroplasty. The procedure removes the ball and socket from your hip joint and replaces them with human-made prosthetics. The first hip replacement was more than six decades ago–since then, the procedure has been refined and developed to increase success rates and improve patient experiences.

For qualifying patients, doctors can perform hip replacements as outpatient procedures. That’s what happened with Valencia. She says, “They sent me home that day. I was just shocked. Usually, you’d think you’d stay in the hospital for at least a couple of days, but it wasn’t a problem. Just to be able to get up and walk right after surgery? That was amazing.”

Hip replacement surgery replaces the entire hip joint to remove diseased and damaged bone that might be causing patients pain and restricting mobility. The hip itself is a ball and socket joint. The ball–also known as the femoral head–is located at the top of your femur, which is the large thigh bone that connects to your pelvis. The femoral head rests inside the cup of bone and connective tissue called the acetabulum, which is located on either side of your pelvis. The ball of the hip joint rotates within the socket, facilitating movement. The joint allows you to jump, run, sit and stand–all smoothly, without a hitch or pain. 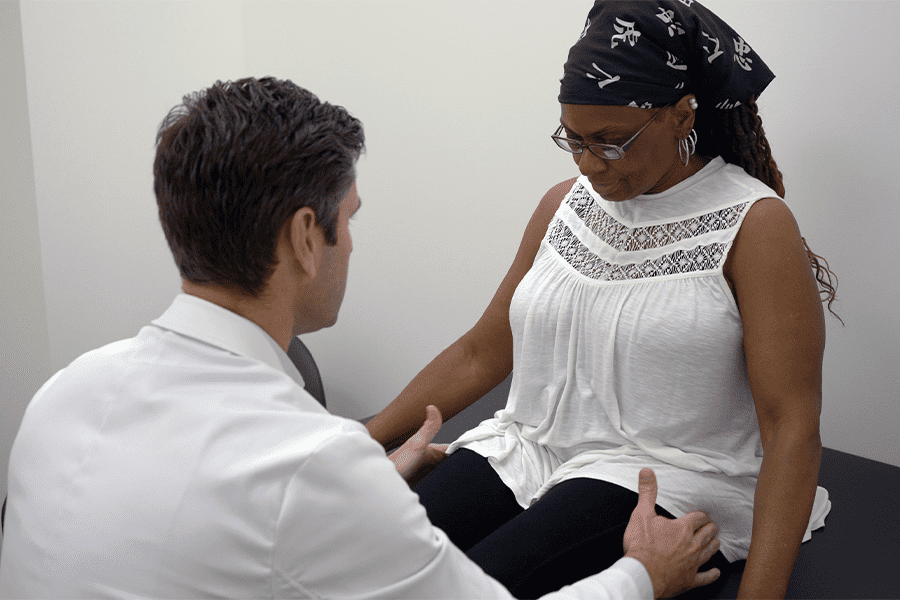 Patients with fractures, arthritis, or impaired hips can have difficulty performing everyday activities and oftentimes live in constant discomfort. For many of them, hip replacement surgery provides the immediate relief from pain that they need to function in their daily lives.

Since its development 60 years ago, doctors have improved the techniques used during hip replacement surgeries. Today, there is a procedure known as anterior hip replacement. Dr. Greene specializes in this procedure and finds that it offers the best results for his patients.

During an anterior hip replacement, the doctor accesses the hip from the front of the joint, carefully moving the tissues aside to work on the bone. The procedure is less invasive than traditional posterior approaches and patients typically recover quickly.

Dr. Greene performed Valencia’s anterior hip replacement surgery. She was surprised by the lack of pain after the procedure. She says, “No pain after surgery. None.”

Why Do You Need Hip Replacement Surgery?

Over time, our hips naturally wear down and can develop arthritis, which causes painful inflammation in the joint. Fractures and other injuries to the bone can also cause severe discomfort in many cases.

The pain caused by these conditions can make it challenging for patients to complete simple tasks. If you have a “bad hip,” sitting down to put on your socks can feel like a chore. It can even become difficult to walk or stand without experiencing severe discomfort.

While non-surgical treatments like prescription medications and physical therapy can help, they are only short-term solutions. When non-invasive methods of treating your hip pain stop working, it’s time to consider hip replacement surgery.

What Are the Benefits of Hip Replacement Surgery? 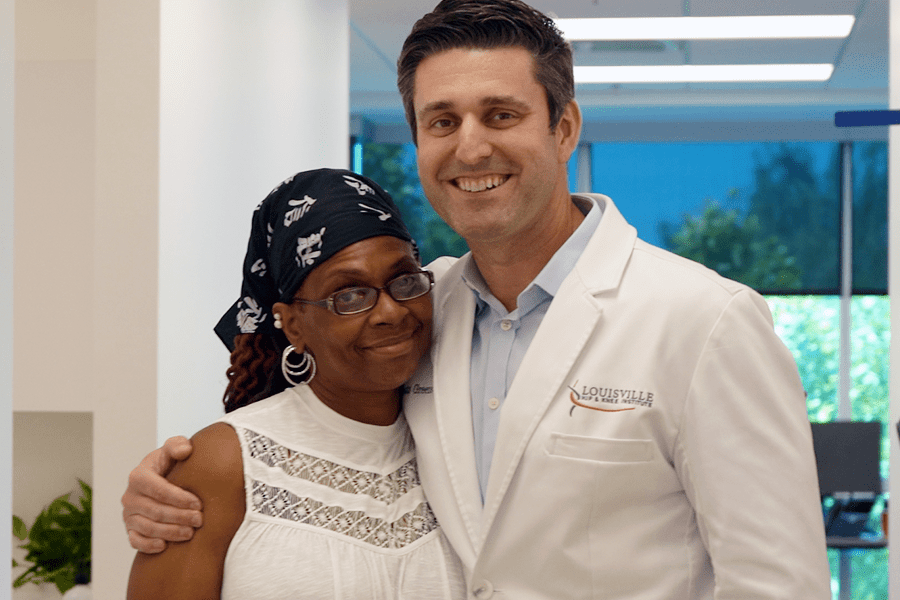 The two primary benefits of hip replacement surgery are improved mobility and a reduction in pain. Valencia says her surgery has done both for her. She says her hips are, “both even–I can stand up straight without any pain.” Like many patients, Valencia put off the surgery as long as she could. Now she says, “It’s just amazing to have it done. I feel so much better.”

Valencia says one of the benefits of the surgery is, “Being able to stand up straight without bending over.” She’s referring to the fact that many hip surgery patients lean to one side to take the weight off their bad leg.

One bad hip can be debilitating–however, two can be an ordeal. That was the case with Valencia, who experienced pain in both of her hips. Valencia says walking increasingly became a chore. Today she says a benefit of her replacement hip is that she can walk “and not feel her hip popping out of place.”

Valencia works at a manufacturing plant. Like a lot of industrial workers, Valencia says, “I do a lot of walking and standing.” Hip replacement surgery has enabled her to move and return to work sooner than she expected. She says, “Just being able to get up and work and just being able to do stuff that I normally wouldn’t be able to do,” is a huge benefit.

The benefit extends to every aspect of her life. Valencia says her mobility has improved tremendously since the surgery. She says she can now, “go outside and do the yard, or plant flowers and exercise at home–it’s a lot better.”

If you are struggling with hip pain, and medications or other treatments are no longer working, consider calling our team at the Louisville Hip & Knee Institute. We’re here to help you get back on your feet.